From The New Midwestern Table by Amy Thielen, Clarkson Potter, 2013

Note: Amy Thielen taught a class on this Tourtiere and spoke to our community for a special holiday event on December 18. Thank you, Amy, for the chance to reprint your recipe here! You can purchase copies of Amy’s cookbook, The New Midwestern Table, as well as her memoir, Give a Girl a Knife, at Farm Table’s restaurant. 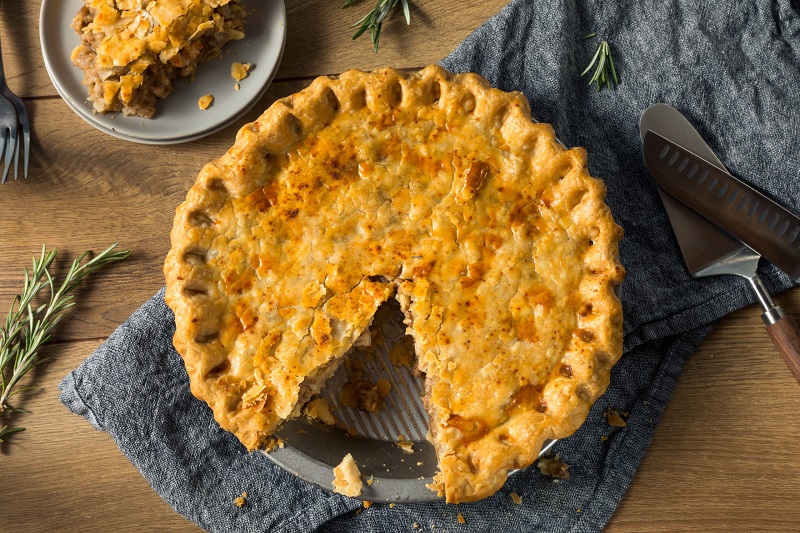 This hot pork pie is the traditional centerpiece of my mother’s family’s Christmas Eve dinner, as it is for many French-Canadians who emigrated to the United States.

Some contemporary tourtière recipes call for ground pork, but I’ve found that it doesn’t really compare with the long-simmered chopped pork filling of my great-grandmother Bertha Dion’s version, fragrant with her own combination of the French quatre-épices, the four basic pâté spices.

The recipe may have come from her grandmother, but we credit my mother with the idea of cooking the filling like a risotto: by slowly adding broth to the chopped pork you can really control the final moisture of the filling, and that careful suspension of juice and meat is what makes the pie.

The simmering pot of meat and spices might be the best reason to make tourtière: it fills the house with an intoxicating perfume. (MAKES ONE 9- OR 10-INCH PIE; SERVES 6 TO 8.)

Put the pork in a large pot and add water to cover. Bring to a simmer and skim off the foam. Add the peppercorns, bay leaves, ¾ teaspoon salt, and the onion half. Simmer very slowly, partially covered, for 3 ½ hours, or until the meat is tender in the center when pierced with a fork.

Transfer the pork to a platter, discard the bones, and cover with plastic wrap. Pass the liquid through a fine-mesh sieve into a medium saucepan, and with a ladle, skim the fat from the top and discard it.

Bring the liquid to a lively simmer and cook until it has reduced by half and tastes concentrated, about 20 minutes. You should be left with approximately 3 cups broth.

Meanwhile, melt the butter in a wide-bottomed saucepan. Add the diced onion and the garlic, season with ½ teaspoon each of salt and pepper, and cook slowly until golden and soft, about 20 minutes.

Roughly chop the reserved meat. Put the cloves, allspice, and ginger in the center of a square of cheesecloth and tie up the corners to make a sachet.

Measure 4 ½ cups meat (save any extra for piling on toast later) and add it to the onions, along with the sachet, thyme, sage, and enough of the reduced broth to cover. Cook the meat gently, simmering it over medium heat. As soon as the meat absorbs the broth, add more, cooking until the mixture has a loose saucy consistency, about 20 minutes total. Discard the sachet. Season with the nutmeg and salt and pepper to taste. Stir in the potato and transfer the mixture to a wide bowl to cool.

(See below for the dough instructions and recipe.) Dust a worktop and rolling pin with flour. Roll out one dough disk a little less than ¼-inch thick, about 14 inches in diameter. Fold the dough in half, transfer it to a deep 9- or 10-inch pie plate, and unfold it. Press the dough into the corners, leaving the overhang, and fill it with the pork mixture. Roll out the second disk of dough and place it on top. Trim the overhanging dough to ½ inch, fold it under into a rope, and pinch the edge decoratively to seal. Cut a small hole in the center of the top crust and add a few radiating slash vents.

Bake the pie until the crust is deep golden brown and the juices are bubbling up through the center hole, 55 to 60 minutes. Allow it to cool for 10 minutes before serving. Refrigerate any remaining pie. 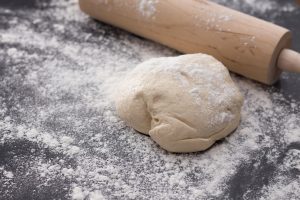 My cousin Bev Adams’s crust (used for the Tourtière) uses egg yolk and milk for the liquid binding. I have no idea where she got the recipe, but it makes a perfectly sealed yet delicate vessel for savory pies and is miraculously foolproof. I pass on this recipe to my most crust-frustrated friends, and they report back with the jubilation of winners. (MAKES ONE 9- OR 10-INCH DOUBLE PIE CRUST.)

In a large bowl, combine the flour and salt. With a pastry blender, cut the butter into the flour until the larger remaining chunks are the size of small peas.

Drop the egg yolk into a liquid measuring cup and add milk until you reach exactly 2⁄3 cup (you’ll use about ½ cup plus 1 tablespoon). Whisk the egg yolk and milk with a fork until combined, and then add it to the flour mixture all at once. Mix the dough with a fork until you can gather most of it into a ball. It should be like packing a large snowball; if it seems any drier or more difficult than that, add another tablespoon of milk.

Divide the dough in half and pat each half into a 1-inch-thick disk. Wrap each disk in plastic wrap and chill in the refrigerator for at least 1 hour and as long as 2 days. (You can also freeze this dough up to six months.) Let it come to room temperature for 30 minutes before rolling it.